The Atlantic City Convention Center is a Winner For Meeting Planners

The Atlantic City Convention Center is a Winner For Meeting Planners

Located within a few hours' drive of nearly one third of the nation's population and 20 percent of the country's business addresses, the Atlantic City Convention Center has become a favorite location for convention, trade show and meeting planners.

Built under the auspices of the New Jersey Sports and Exposition Authority, (NJSEA), the $268 million Atlantic City Convention Center opened with much anticipation and fanfare on May 1, 1997.

The facility contains 500,000 square feet of contiguous space and occupies a site of nearly 31 acres.  One of the most sophisticated facilities of its kind in the nation, the center has innovative communications technology and offers the instantaneous transfer of information throughout the building or across the globe.

Room 311, the Executive Level Presentation Room, features a large screen projection system with integrated video conferencing and videotape and audio input, ideal for interactive meetings and product demonstrations between the Convention Center and any point in the world.

The center is connected with the Atlantic City Rail Terminal, where the Atlantic City Line runs between Philadelphia and Atlantic City.  Jitneys, buses and taxis queue at the front of the building to provide service to other points within the city.  A pedestrian airbridge links the center to the adjoining Atlantic City Sheraton Convention Center Hotel.

The venue was most recently bestowed with LEED GOLD certification for its green initiatives. The LEED (Leadership in Energy and Environmental Design) rating system, developed by the U.S. Green Building Council (USGBC), is the foremost program for buildings, homes and communities that are designed, constructed, maintained and operated for improved environmental and human health performance. 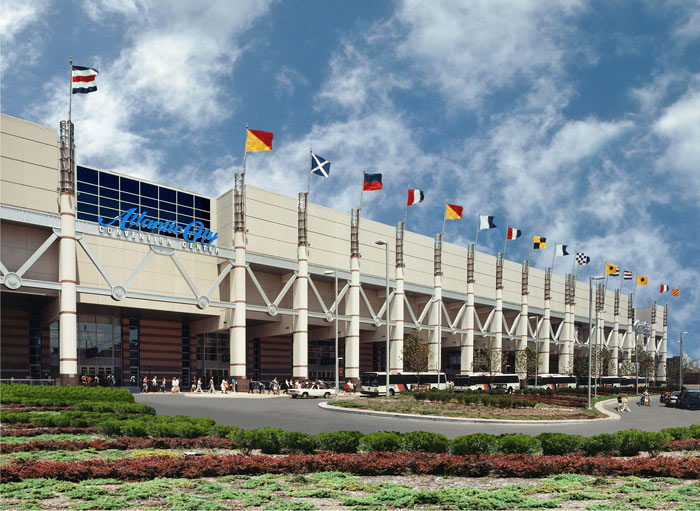