Back to AC Stories 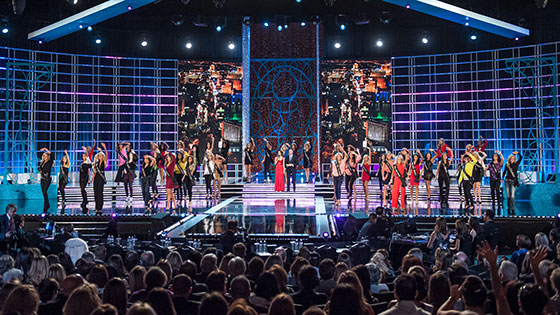 What began in the 1920s as a local marketing ploy to extend Atlantic City’s tourist season past Labor Day, the Miss America competition evolved into an achievement program based on a culmination of hard work, personal dedication and talent. The Miss America Organization (MAO) also became the world’s leading provider of scholarship assistance for women. More than $45 million was available last year to the more than 12,000 young women who participated in the Miss America system – including on the local and state levels.

The 13-day event begins after Labor Day and concludes with the televised final night of competition September 9. The pageant days include the Arrival Ceremony, three days of preliminary competitions, and the “Show us Your Shoes Parade”.

The 53 contestants representing each state plus the District of Columbia, Puerto Rico and the Virgin Islands are judged on these preliminary competition categories:

Show Us Your Shoes Parade
One of the most popular and beloved traditions in Miss America Pageant history is also returning: the Show us Your Shoes Parade. Although the exact origin seems to be debatable, most accounts agree that it began in the 1970s and was related to individuals on a hotel balcony overlooking the parade route. From that viewpoint they noticed that some of the contestants riding in the convertibles wore casual footwear or no footwear at all. “Show us your shoes” started as a teasing refrain and quickly caught on.

In past years, contestants have worn anything from army boots to ski boots, flip flops to swim fins, bunny slippers to designer shoes. For the 90th anniversary of Miss America, the “DSW Show Us Your Shoes Parade” included a Robin Leach interview with each contestant about a second pair of shoes she created to showcase her personal theme. This year’s Parade will also highlight legendary Miss Americas, along with elaborate floats, marching bands, special units, surprise performances, and special guests, according to the Miss America Organization (MAO).

Miss America Tickets
Season tickets (to all 3 night preliminaries and the final night of competition) range in price; the "Show us your Shoes” parade is free to attend but if you’d prefer to sit instead of stand, reserved-seat tickets can be purchased, and Atlantic City’s famous rolling chairs will be available All may be purchased online from the Miss America Organization.

Fun Facts about Miss America History:
The Fall Frolic of 1921 turned into a two-day “Inter-City Beauty” contest that attracted a greater-than-expected crowd of 100,000. The contestants (selected from photographs) were judged on beauty and popularity, and two finalists were chosen: amateur and professional. The judges selected amateur Margaret Gorman, Miss Washington, D.C., as the overall winner. She received the Golden Mermaid trophy and, after celebrations, returned to high school.

The following year the contest became a national event. When Gorman returned the following year to defend her position, she was referred to as Miss America (the first time this title was used), and contestants arrived from around the country to participate.

The first high school graduate and the only contestant to win two titles was Miss Columbus Mary Katherine Campbell in 1922 & 1923. Rules changed so contestants may enter local and state pageants numerous times but cannot represent her state more than once.

In 1933 Marian Bergeron, Miss Connecticut, was the youngest winner (15 ½), and she held the title for two years because no competition was held in 1934. Talent competition took place starting in 1935 but didn’t become mandatory until 1938.

In 1945 the Miss America Organization began the tradition of empowering young women to achieve their personal and professional goals and is the world’s largest provider of scholarship assistance for young women. The first scholarship recipient was Bess Myerson. Participation in the Miss America system not only helps contestants pay for college but also to prepare for a career.

An advocate of nursing and hospice programs, Miss America 1988 Kaye Lani Rae Rafko used her scholarship money to pursue an advanced degree and open a hospice program in her Michigan hometown.

There is no entrance fee for the competition but a new requirement asks contestants to raise a minimum of $100 in donations for the Children’s Miracle Network and the Miss America Scholarship fund.

Miss America has evolved from beauty queen to role model and spokesperson, traveling approximately 20,000 miles a month, visiting many cities in each state and sharing her passion about an issue of importance in today’s society.

Not every state representative is a native of that state. For example, three Miss New Jerseys hailed from elsewhere: Texas, Pennsylvania, and the 2014 Miss Jersey Cala McCollum is from Arkansas.

Three states share the distinction of claiming the most (6) Miss America winners: California, Ohio and Oklahoma. There have been no winners from 19 states and two US territories.