For those who think a place’s history is as enjoyable as the present, this one is for you.

Day One - Morning: Start your day by attempting to scale Historic Absecon Lighthouse’s 228 steps to its summit where breathtaking panoramic views of Atlantic City, the Atlantic Ocean and its surroundings await.  Located one block off the Boardwalk at Rhode Island and Pacific Avenues, Absecon Lighthouse, which originally opened in 1857 and helped aid mariners navigate the tricky Jersey shoreline, is the tallest such structure in New Jersey at 171 feet and still has its original first-order Fresnel Lens in place.

Day One - Afternoon: The most famous historical treasure in Atlantic City is its Boardwalk.  Built in 1870 in order to help adjacent hotels keep sand out of their lobbies, the Boardwalk spans 5.5 miles in length and is the nation’s oldest boardwalk.

Jim Whelan Boardwalk Hall, constructed in 1929 and once known as Atlantic City Convention Hall, with its 137-foot-high barrel vaulted ceiling was once the world’s largest clear span space at the time of its opening.  The Hall is also home to the world’s largest pipe organ, the Midmer-Losh, which has 449 ranks of pipes derived from 314 stops – 230 flues and 84 reeds.  Tours and recitals are held daily starting mid-May through September.

Marvel at the recent lobby renovations and take a step back in time with the “Atlantic City Experience” exhibit.  This exhibit provides an interactive timeline with movable partitions and a mini theater with video clips highlighting key dates in the City’s rich past.  There are also several historic display cases and touch screens with hundreds of archival images of Atlantic City.

Day One - Evening: After a long day of climbing stairs and walking the boards, now it’s time to eat.  There are many long-established restaurants in Atlantic City and the Knife & Fork Inn is one of them.  Opened in 1912 and a former speakeasy during the Prohibition Era, the Knife & Fork serves up some of the best steak and seafood dishes around.  The restaurant was also a favorite of Enoch “Nucky’ Johnson.  If you are looking for something a little more casual, then White House Sub Shop is the place for you.  For over 70 years, this world famous sub shop has feed everyone from the Beatles to the Rat Pack, sports legends to celebrities and everyone else in between.

Because there is no such thing as too much history.

Day Two - Morning: Just off the Boardwalk is the New Jersey Korean War Memorial, located in Brighton Park where Park Place meets the Boardwalk. It features sculptures of a group of soldiers under fire, a nurse helping a wounded soldier and a 12-foot high statue of “The Mourning Soldier” clutching dog tags from fallen soldiers.  The back wall of the memorial is engraved with the names of the 822 New Jerseyans who were killed or are still missing in action.  There is also a wall honoring the five New Jersey servicemen who were award the Medal of Honor for heroism.

Located on Pacific Avenue and Dr. Martin Luther King, Jr., Boulevard is the Civil Rights Garden. This sanctuary represents the long journey of African-Americans to achieve freedom and equal rights.  A winding brick path is aligned with seasonal plants, flowers and gingko trees where eleven black granite columns are inscribed with quotes from dozens of historical figures. The central column features an upraised hand and a large bronze bell hovering over a reflecting pool.

Day Two - Afternoon: In nearby Margate, Lucy the Elephant is one piece of history you should not miss.  At over a hundred years old, Lucy the Elephant was initially built to lure real estate investors to the shore.  Since then she has served as a restaurant, a tavern and even a house.  She was restored in the 1970s and moved to her current location at Washington and Atlantic Avenues where she resides as a museum.  You can climb to the “howdah” on Lucy’s back for a panoramic view of the ocean, beach and surrounding area. 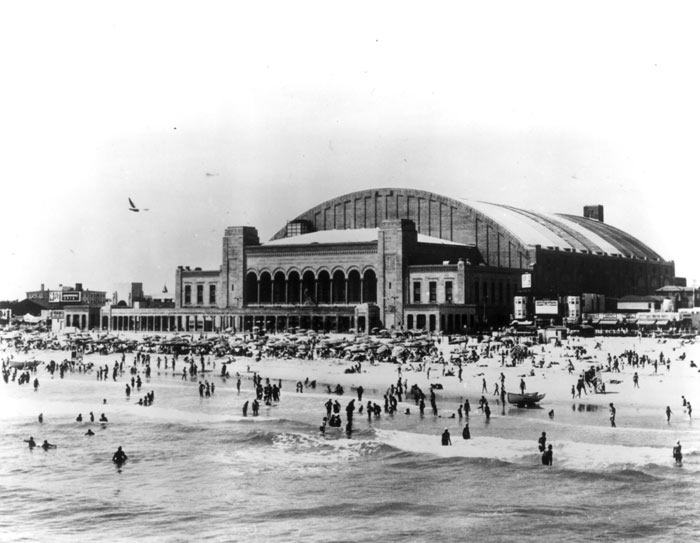 Historic Boardwalk Hall - Beach
Atlantic City had been a favorite destination for tourists ever since its founding in 1854.