The National Electric Light Association was its first convention.  The world's first indoor football game was played here.  Lyndon B. Johnson accepted his nomination on stage during the 1964 Democratic Convention here.  The Beatles played here.  As did Pavarotti, The Rolling Stones, Fleetwood Mac, Barbra Streisand, Andrea Bocelli and Paul McCartney.  Where is here?  None other than Historic Boardwalk Hall.

Atlantic City has been a favorite destination for tourists ever since its founding in 1854.  By the early 1920s, it also became a popular convention destination.

The post-World War I building boom provided the city with the luxury hotels that it needed to attract thousands of convention goers. The venue to host them was the newly built, state-of-the-art Atlantic City Convention Hall.

The new Convention Hall was dedicated on May 31, 1929, replacing a temporary exhibit hall located on the beach next to Million Dollar Pier. The final cost of the project was $15 million. Constructed on seven acres of concrete, the building was a modern adaptation of the Romanesque period. It was also the largest auditorium in the world built without roof posts or pillars and, as such, was heralded for its architectural and engineering achievements.

Carved in the Indiana limestone above the building’s Boardwalk facade was the testimonial that summarized its purpose:

A permanent monument, conceived as a tribute to the ideals of Atlantic City,
and dedicated to recreation, social progress and industrial achievements.

Flanking this statement on the front of the two towers is the following: “Festivities, Music, Pageantry, Drama, Athletics, Education, Science, Conventions, Art, Industry” and the Latin phrase “Consilio Et Prudentia,” or Counsel and Prudence.

The arched roof was modeled after the clear-span train sheds of Europe and closer to home, Philadelphia’s Reading Terminal. It maintained its structural integrity without supporting beams, through 10 pairs of three-hinged steel trusses, each spanning 350 feet and weighing 220 tons per pair. The trusses were tied to the frame columns to allow the building to flex with wind and ground pressure. Between the monumental arches was an inner ceiling clad in acoustic tiles made from compressed sugar cane fiber.  The tiles were detailed to suggest the clay tile ceilings of a Roman public bath. It was truly a work of art, as well as a functional building.

The new Hall claimed the world’s largest clear span space-456 feet long and 310 feet wide under a 137 foot-high barrel vault ceiling. The large, column-free space was ideal for exhibitions and conventions. It also boasted the latest in technical advances--lighting, acoustics, and performance design.

Novel approaches to the theatrical lighting were incorporated into the structure. The 196,000 square-foot barrel ceiling of aluminum painted tiles became the reflector for a dazzling show of lighting technology, anticipating the future of using artificial light to enhance and define exterior and interior space. The design brought an “electric sun” inside the auditorium.

For 1920-era conference goers, the building offered 268,000 square feet of exhibit space, 20 conference rooms, and two bath houses. It also housed the world’s largest switchboard and what was proclaimed to be the world’s largest stage. The stage measured 110 feet wide, 85 feet deep and 165 feet between the wings.  Above it, a colorful globe bearing the initials WPG (World’s Playground) advertised the city’s first radio station, broadcast from the Hall.

By 1940, the Hall had become the permanent home of the Miss America Pageant.  It also hosted the country’s first indoor nighttime college football game and first indoor flight by helicopter.  Over the years, it has been the site of national political conventions and a variety of sports events including boxing, bicycle racing, basketball, track and field, tennis, ice hockey, archery, horse and dog racing, jousting, horse shows, midget car racing, bowling and wrestling.

As with many historic buildings, time took its toll. By the early 1990s -- nearly three-quarters of a century after it first opened -- the Atlantic City Convention Hall had fallen into significant disrepair.  While much of the Hall’s architectural grandeur remained intact, it still needed work. In addition, there was a new need for an arena, with plans to open a new, larger Convention Center near the Atlantic City Expressway.  The larger center opened in May of 1997 as the primary location for trade shows and conventions, while plans for the original Hall called for use as the city's prime venue for stage shows and other entertainment events.

The renovation was based on a vision of reinvigorating this historic structure as a permanent site for performance events, a contemporary setting for the annual Miss America Pageant and an intimate setting for sporting events. The architects were Ewing Cole Cherry Brott, an expert team of historic renovators based in nearby Philadelphia. While plans called for extensive improvements, the design team took care in preserving and enhancing important aspects of the look and character of this celebrated landmark.

The primary focus of the restoration revolved around the ceiling, the loggia (open gallery) and stage and curtain. The renovation created a modern seating bowl in the lower portion of the original empty auditorium space.

Following were highlights of the renovation:


A new seating bowl was installed below the historic arcade level to accommodate flexible modern seating in a variety of configurations. Current seating capacity has been expanded to approximately 13,800 for concerts and 10,500 for hockey. In addition, 436 high-end club seats were installed for special corporate and event seating.


The new seating system features appropriately designed sight lines. It is integrated with the original pile foundations that support the building, while at the same time, preserving the original architecture of the perimeter arcade, from which the vaulted roof springs.

The original 137-foot barrel vaulted ceiling has been restored to provide improved acoustics and high-tech lighting effects.  Replacement of the historic ceiling was required to eliminate the asbestos fireproofing on the trusses.  As a result, significant improvements could be made to the acoustics.  Sound absorbing material is now located behind the new ceiling finishes, bringing the space into compliance with modern acoustical standards.

Through the use of modern technology, the engineers recreated the original lighting. A computer-controlled network of colorized luminaries has replaced the elaborate scheme of incandescent lights, which creates the same look and feel.  It is designed to efficiently light the restored ceiling with a full spectrum of colors.


Amenities
New amenities have been provided, such as larger, more comfortable seating, a spacious concourse with concessions and a full-service kitchen suitable for catering special events.

The restoration was designed to provide enhanced accessibility for disabled patrons.

The restorations to the Hall cost approximately $90 million.  They were executed under the auspices of the building’s owner, the New Jersey Sports & Exposition Authority (NJSEA).  The Casino Reinvestment Development Authority (CRDA) provided $72 million of funding.

The restoration was successful.  Now listed on the National Register of Historic Landmarks, Boardwalk Hall's renovation produced a glimpse into the dramatic and original Roman Renaissance style, while providing a 21st century experience in terms of comfort and amenities.

Since 2003, leading trade publications have recognized Boardwalk Hall as either one of the top grossing mid-sized arenas in North America or the World.


Name Change
In 2017, a bill was passed to rename the then 91-year old Boardwalk hall to Jim Whelan Boadwalk Hall in honor of the late Sen. Jim Whelan, a former Atlantic City mayor and state lawmaker.


Recent Renovation
A $10.4M lobby renovation took place in 2019.  Changes included replacement of escalators, the addition of staircases, interactive video boards, silhouettes, updated flooring, plumbing and mechanical work.  Additionally, the lobby is home to the "Atlantic City Experience" exhibit.  Curated by the Atlantic City Free Public Library, the exhibit provides an interactive timeline with movable partitions and a mini theater with video clips highlighting key dates in the City's rich past.  There are also several historic display cases and touch screens with hundreds of archival images of Atlantic City. 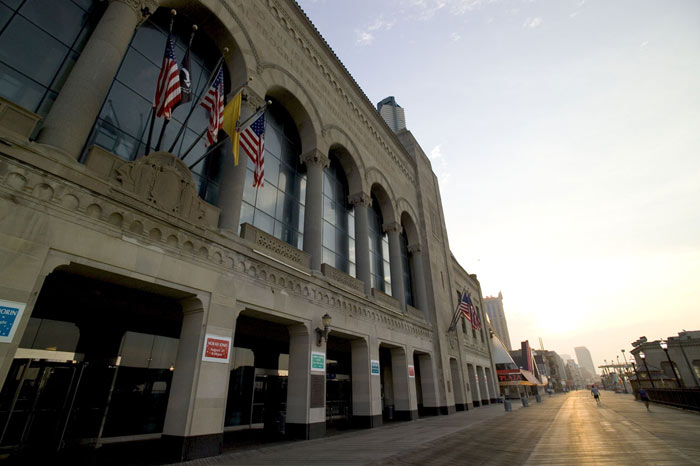 Boardwalk Hall
Since 2003, Boardwalk Hall has received recognition on eight prior occasions from both Venues Today and Billboard magazines as either the top grossing mid-sized arena in North America or the world.