Atlantic City Boardwalk: A Stroll On the Wooden Way is Steeped in History

Atlantic City Boardwalk: A Stroll On the Wooden Way is Steeped in History

Aaahh, the Atlantic City Boardwalk.  It is the famed promenade known for the roaring sea and dozens of confection shops and amusements.  It is the cherished blue property of the most popular board game in the world. It is truly the walk that inspired many more, but can never be duplicated.

Surprisingly, the most famous walkway on the East Coast was not built to be anything more than a solution to keeping the sand out of the ritzy beachfront hotels and the Camden and Atlantic’s railroad passenger cars.  A fed-up railroad conductor and hotel owner first petitioned to the city council in 1870, asking that a mile-long footwalk be established.

Costing five thousand dollars and built 10 feet wide in sections of 12 feet, the first of the famed boards was dedicated on June 26, 1870.  No commerce of any kind was allowed within thirty feet of the walk, and at the end of each summer season for many years, the Boardwalk was actually taken apart and stored for the winter months.

Ten years later, vacationers had splintered the Boardwalk, so city council built a new one, this time four feet wider and much longer.  The go-ahead was given at this time as well for commerce to get closer than thirty feet, ten to be exact.  By 1883, this ordinance was “tossed to sea” and almost one hundred stores, stalls and stands had Boardwalk addresses.

A storm in 1884 was the cause for a third boardwalk to be built, twenty-feet wide, two miles long, and this time with pilings five feet above the beach so the tides could wash beneath safely.  Safety was not exactly the first thing you thought of when it came to the Boardwalk.  There were no railings, and accounts told of at least somebody every day falling off the boards, usually in the act of flirting.

An 1889 hurricane brought about a new, improved, and almost final Boardwalk.  It was all about bigger and better with this one, 24-feet wide, 10 feet high, nearly 4 miles long, and railings on both sides.  Its popularity and large crowds demanded some small improvements and expansion in 1896. The year 1916 saw the design of the present herringbone board pattern, supportive steel pilings, and forty-foot steel beams, making it the Boardwalk it is today.

By the early 1900s, the Boardwalk had replaced the ocean as Atlantic City’s greatest and most romantic attraction.  It had the strollers, the rolling chairs, the bathers and the lovers.  Not even Paris’s Champs Elysees could beat that!  There were even hit songs, and later films, singing its praises.  Lavish hotels, enormous electrical signs and rambunctious, colorful amusement piers started to hug it from both sides.

The 1920s saw the full-blown hoopla of Atlantic City from the Boardwalk.  Stunts, shows, the greatest big band music of the era, the original Miss America pageant and parades were all part of the mix, all at its feet.  Women and men in the latest fashions, who wanted to be seen, knew the Boardwalk was the place to be.  In 1929, just months before the stock market and U.S. economy crashed, the New York Times toasted the Boardwalk as, “A magnificent proof of America’s newly found wealth and leisure.  It is an iridescent bubble on the surface of our fabulous prosperity.”

Wartime in the 1940s also made some Boardwalk memories.  Convention Hall, located right on the Boardwalk, was then serving as a training facility, preparing thousands of young soldiers for service. Squads of armed forces could be seen marching up and down the boards. Mock beachfront invasions and war bond rallies were common as well.  As 1942 rumors began flying that German U-boats were on the watch along the coast, Boardwalk lamps were shaded for protection.

The 1950s and 1960s gave the Boardwalk some real star power, and then some.  Some famous feet to tread upon the boards included Marilyn Monroe, Jimmy Durante, Ed Sullivan, Joe DiMaggio, Frank Sinatra, Milton Berle, Dean Martin and Bing Crosby.  The Beatles ate the city’s world famous subs on it.  Annette Funicello and Frankie Avalon opened a bowling alley on it.  Jayne Mansfield filmed scenes from The Burglar on it.  Let’s just say it’s seen its fair share of stars, and we’re not talking astrology.

The late 1970s saw the groundbreaking decision to bring casino gaming to the fading beach resort. The Boardwalk stood as proud as ever when Resorts International first opened its doors on Memorial Day Weekend, 1978.  Thousands came in those first three days and gave it the best stomp it had in years.

With the legalization of gambling, hotels, stores and piers along the Boardwalk started to make like deeds in a MONOPOLY game and changed hands rapidly.  The boards stood by as out-of-town bigwigs came, saw and invested.  This investing has prospered into the new century, with the Boardwalk ever by its side.

Over a century after its emergence and evolution, the Boardwalk still stands as a historic American symbol of good times and rich culture.  Some may still believe that Atlantic City’s future rides on the roll of a dice.  They just might want to take a stroll on that timeless Boardwalk to realize this city is going nowhere but up.  Place your bets!

Whether it be parades, endurance events or entertainment, the Atlantic City Boardwalk is the place to be.

Everybody loves a parade and Atlantic City aims to please with the annual St. Patrick’s Day Parade.  For over 30 years, bagpipers, marching bands, Irish steppers, floats and more have made their way down the great wooded runway in March for a celebration of green and camaraderie.

Take to the boards in April for a run and some fun during AmeriHealth New Jersey April Fools Half Marathon.  Cash awards for top finishers, live course entertainment, costume contests and free beer (21 and over of course) are just a portion of the day's menu.

The Rock ‘n’ Roll Atlantic City Marathon is a race weekend like no other.  Set in May, the race route starts at Bader Field, moves through Ventnor and Margate before finishing on the Boardwalk.  Along the way, live bands and DJs will keep everyone amped up leading to an after-party festival at the finish line.  Twilight runs are also a part of the weekend events.

Limits are put to the test the month of September during IRONMAN 70.3 Atlantic City. Beginning with a 1.2-mile sheltered swim in the beautiful back bays of Atlantic City, the athletes will embark on a 2.5x loop bike course before finishing a 13.1-mile on the world-famous Boardwalk.

The AmeriHealth NJ Atlantic City Marathon & Half Marathon has participants from across the U.S. competing to qualify for the Boston Marathon.  Since 1958, athletes have tested their strength and stamina by participating in this 26.2-mile marathon that is known for its flat and fast course.  The race not only has people running on the world-famous Boardwalk in October, it also takes runners through the streets of Atlantic City as well as the neighboring communities of Ventnor, Margate and Longport.  Race weekend also includes 10k and 5k runs and a 13.1 mile half marathon.

In addition to these events, there are also charitable runs and walks taking place on the Boardwalk throughout the year.

However, the big show everyone talks about is the Atlantic City Airshow in August.   Taking place over both Atlantic City and the Atlantic Ocean, the Boardwalk provides the best views.  Watch as some of the top stunt pilots in the country show off their skills and thrill the crowds.  If you can’t get out that day to watch, maybe you can catch a few jumps, rolls or other stunts the day before, as the participants practice for the event.

Starting in mid-June through early September, Kennedy Plaza is abuzz with free entertainment seven nights a week.  Appealing to a wide variety of music genres, the Boardwalk Summer Entertainment Series offers a little something for everyone. 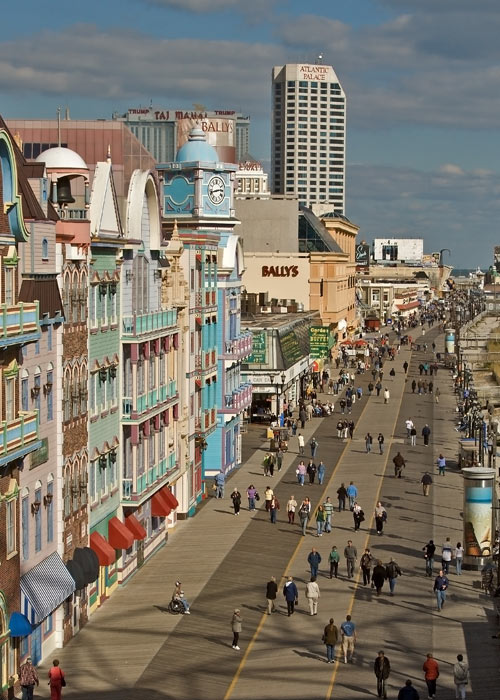