A brief look at Atlantic City's history is all it takes to see that the resort was always a must do.  "Oceans of promotions" and high-handed hyperbole reigned supreme, almost from the day the city was founded.  In September 1921, King Neptune crowned a beauty queen as a publicity stunt, in order to extend the summer season of a popular beach resort.  The place was Atlantic City.  The winner was 15 ½-year-old Margaret Gorman, the first Miss America. The Miss America Pageant became as synonymous with Atlantic City as its sandy beaches, famed Boardwalk and fresh sea air.  Yet, Atlantic City's salty history is much more than a parade of Miss Americas passing through.  Now celebrating over 150 years of hospitality and hype, it is time to take stock of the origins of this vibrant town.  Origins that include a high diving horse, a confection created by a storm and some of the most innovative artwork and craftsmanship you can find.
Early History

The early 1800s saw Atlantic City as a desolate island known then only as Absegami, the Native American word for “Little Sea Water.”   It was nothing but sand, marshes and wilderness. The earliest settlers were two “less than neighborly” hermits: Jeremiah Leeds, grandfather to the famed Jersey Devil, and an early entrepreneur from Philadelphia, civil engineer Dr. Jonathan Pitney.  Dr. Pitney saw the potential of the area and started talking it up as an ideal spot to recuperate from the woes of the city, by taking in the healthful salt air.  The route of a proposed railway from Camden to the yet unnamed resort in the 1850s fascinated investors, who stepped right up with their money in hand.
In 1853, the final plans for the railroad included the decision for the city’s official name.  “Atlantic City” met with unanimous approval against early favorites such as Bath, Seabeach, and Surfing.  In 1854, Atlantic City’s first municipal charter was approved and July of that year saw the first two and a half-hour train ride steaming out of Camden, with much celebration and hoopla. The rest is history.  Grand hotels grew from small cottages, a walkway of boards to keep the sand out of the hotels became a world-famous Boardwalk, giant entertainment piers gave birth to publicity stunts and the city kept evolving into one of the world's best-known seaside resorts.
Step into any historical museum throughout Atlantic and Cape May Counties and be instantly transported back to the times of “ocean madness,” thrilling mechanical marvels on the bustling Boardwalk, the evolution of Miss America, early life and myths of the Pine Barrens, gala dances in seaside hotel ballrooms and Victorian life on the Cape.

Atlantic City is home to some of the most unparalleled memorials dedicated to the memory and continuing struggles of humankind.  These jewels include a memorial modeled after a Greek Temple, an eternal flame dedicated to New Jerseyans who fought and gave their lives in the Korean War, one-of-a-kind tribute honoring the long journey of African Americans towards civil rights and a memorial dedicated to New Jersey’s fallen first responders.

Located at S. Albany and Ventnor Avenues, the World War I Memorial is modeled after a Greek Temple and measures 124 feet in diameter with 16 large Doric columns.  The rotunda houses a 9-foot tall bronze statue titled “Liberty in Distress” and the battle names in which Atlantic City soldiers fought in are etched in the top along with medallions of four of the armed forces.


The New Jersey Korean War Memorial is located in Brighton Park and features a sculpture of a group of soldiers under fire, a soldier and nurse helping a wounded soldier and a 12-foot tall statue of "the Mourning Soldier" clutching dog tags from fallen soldiers.  The back wall of the memorial, beneath an eternal flame, are the names of the 822 New Jerseyans who were killed or are still missing in action, as well as a wall honoring the five New Jersey servicemen who were awarded the Medal of Honor for heroism.

One of Atlantic City’s most breathtaking spots, The Civil Rights Garden, is located a block off the Boardwalk at Pacific Avenue and Dr. Martin Luther King Jr. Boulevard.  This sanctuary of nature features a winding brick path through a garden of seasonal plants, flowers and gingko trees along with eleven black African granite columns.  The path represents the long journey of African-Americans to achieve freedom and equal rights.  Inscribed on the columns are quotes from dozens of historical figures, with the central column featuring an upraised hand and a large, bronze bell hovering over a reflecting pool.

“In The Line of Duty” - First Responders & 9/11 Memorial features a 7’ tall bronze casted statue of a police officer, a fireman and K9 officer mounted on a 6’x4’ granite disc.  A second monument features two marble pedestals, representing the former World Trade Center Towers, with the first displaying a police shield on top of the pedestal while the other features a firefighter’s helmet.  Each pedestal is approximately 3’6” high and also mounted on 6’x4’ granite discs with a flagpole in between.  A recent addition to the memorial is a steel I-beam from the World Trade Center's North Tower, containing floor joists and concrete from the original building.  The memorial is located on the Boardwalk at St. James Place between Tennessee and New York Avenues.
Art

Atlantic City is home to more than 50 murals with additional ones to come.
Area art museums house a plethora of unique artwork, historical exhibits and memorabilia, taking on whole new meaning here.  Throughout the year, these cultural meccas showcase unique exhibits by artists from around the world, and offer workshops, group tours and lectures.
48 Blocks AC is a celebration of the artistic talents, creativity, community, culture and history of Atlantic City. The Noyes Arts Garage of Stockton University is 16,000 square feet of arts retail space and studios as well as home to the Atlantic City branch of the African-American Heritage Museum of Southern New Jersey.  The Arts Garage is located on the ground level of The Wave Garage at Fairmount and Mississippi Avenues.

Visitors and residents can learn the history and culture of African-Americans at the Atlantic City branch of the African-American Heritage Museum of Southern New Jersey, located in the Noyes Arts Garage of Stockton University.  The museum is 2,000 square feet of unique artifacts including graphics, drawings, paintings, books, music, films and manuscripts, all depicting African-Americans in a historical context.

The Ocean City Arts Center on Simpson Avenue in Ocean City offers a casual, intimate setting for monthly gallery exhibits featuring regional and national artists of various mediums.  The center also sponsors annual events such as the Juried Photography Show in April and the Boardwalk Art Show in August
WheatonArts and Cultural Center (formally Wheaton Village) is located on 45 wooded acres in Milville and is home to the Museum of American Glass, The Down Jersey Folklife Center, an international Creative Glass Fellowship Program and several craft studios.  The museum is one of only 8 museums in the state of New Jersey to be accredited by the American Alliance of Museums and offers over 18,000 square feet of exhibition space, a collection over 20,000 pieces as well as a research library and archives.
In addition to daily glass blowing and artist demonstrations, WheatonArts features special exhibitions, programs, workshops, performances and several weekend festivals, including the award-winning Festival of Fine Craft.

Where else can you unwind on the beach, then step back in time to the days of traditional glassmaking deep in the Pine Barrens or Victorian life complete with ice cream parlors and general stores, all in one day?  Southern New Jersey, of course! Atlantic City is a neighbor to some of the most unique and beautifully preserved historic villages on the East Coast.  One of these cultural meccas, Batsto Village, is located deep in the rustic Pine Barrens of Southern Jersey on Route 542 and provides a taste of New Jersey’s 18th century bog iron and 19th century glassmaking industry.  Visitors can take a guided tour of the ironmaster’s mansion, see charcoal kilns of the period and watch a blacksmith in action.  Children of all ages can enjoy the village’s nature center, old post office, general store and workers’ cottages, as well as take advantage of picnic areas and hiking trails through the woods along Batsto Lake.  This historic treasure is the perfect day trip for visitors looking for a unique and historical experience. Historic Smithville started as a one room, stage coach stop and over the years has blossomed into a wonderful memory-making way to spend a day or two.  A stroll along the cobblestone walkways offers a quaint setting for shopping and dining, plus train rides and a carousel for the kids.  Keep on the lookout for special events including the annual May Fest, Irish Festival and Oktoberfest celebrations.
Also down the street from Smithville is the Edwin B. Forsythe Wildlife Refuge.
Tuckerton Seaport in Tuckerton is an authentic working seaport village, bringing to life the rich traditions and heritage of the New Jersey shore region.  This 40-acre site includes 17 historic and recreated buildings, a maritime forest and wetlands nature trail, two houseboats and a decoy gallery. Visitors can spend the day exploring exhibits and meet the people who lived, worked and played along the Barnegat Bay:  decoy carvers, boat builders, basket makers, quilters, commercial fishermen, artists and other baymen and women.

Cold Spring Village, located in Cape May, is a thickly settled agricultural neighborhood, containing about 40 houses within the circle of a mile.  It derives its name from an excellent spring of cold water flowing up through the salt marsh.

Balić Winery in Mays Landing makes more than 27 award winning fine hand crafted wines with the European accent. The winery offers guided tours, wine sampling and a store on the premises.
Wineries and vineyards are located only minutes away from Atlantic City, including the Renault Winery in Egg Harbor City, one of the oldest continuously operating wineries in the country.  Guests can partake in tours and wine tastings, fine dining or a round of golf. The site is also popular for weddings, receptions and bridal showers.
Based in Hammonton, Tomasello Winery is one of the largest winegrowers in New Jersey, having 70 acres of grapes under cultivation and is the second-oldest active winery in the state.  The winery offers wine tasting, tours, a gift shop and banquet facilities.

Lighthouses
Absecon Lighthouse at Rhode Island and Pacific Avenues in Atlantic City is a historic structure designed by Civil War General George Meade and built in 1857.  Visitors who can climb the 228-step lighthouse are rewarded with a bird’s eye view of Atlantic City’s dazzling skyline and the back bay area.  A photographer’s delight, the lighthouse is the tallest in New Jersey and still has its original first-order Fresnel Lens in place.  The Cape May Lighthouse has been an aid-to-navigation for mariners and attraction for visitors since being built in 1859.  More than 2.5 million people have climbed the lighthouse since it opened to the public in 1988.  For those who choose not to climb, the Oil House on the grounds contains a fully accessible Visitors’ Orientation Center and Museum Shop carrying souvenirs, books and maritime items. The Hereford Inlet Lighthouse in North Wildwood was built in 1874 and is the most important historic structure on Five Mile Beach.  Open to the public, the lighthouse continues to function as an active navigational aid maintained by the United States Coast Guard.  Visitors can learn about the history of Hereford and get a glimpse of the life of a lighthouse keeper in the late 19th and early 20th century. 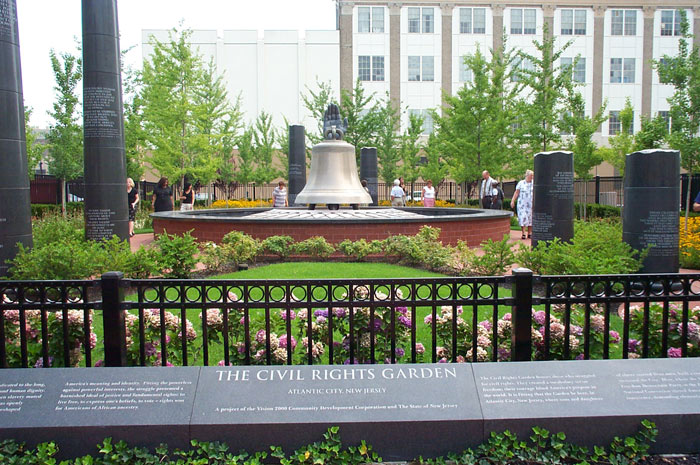