Chicken Bone Beach, Atlantic City, and All that Jazz

Back to AC Stories 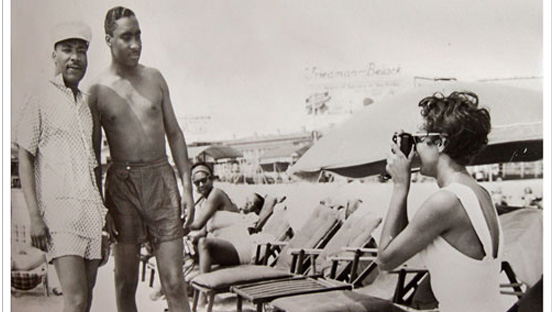 Chicken Bone Beach, Atlantic City, and All that Jazz

Atlantic City, Chicken Bone Beach, and All that Jazz

Jazz brought whites and blacks together at Club Harlem, Grace’s Little Belmont, and other nightclubs in Atlantic City. But when the sun came up, blacks were segregated to a strip of beach at Missouri Avenue.

Let’s take a trip in the Way-Back Machine. The time is 1947. The place is Atlantic City’s famed Club Harlem. It’s 5 a.m., and a wide-eyed 13-year-old boy walks into the joint. Egged on by his older siblings, he passes under that familiar marquee, through clusters of tables and into hazy clouds of blue smoke, squinting into the lights of the stage. And what he sees there astounds him. Though it’s nearly dawn, a lissome line of briefly clad chorus girls is still kicking, and the sound of jazz fills the air. And even at this hour, the place is packed. Young Bob Perkins is dazzled.

“I had never been up that late and that early,” recalls Perkins, the legendary broadcaster who just marked 50 years in radio. “I don’t remember who was playing. All I remember is that chorus line: six magnificent ladies with pony tails, fishnet stockings and big smiles, like something out of the Folies Begere.” He chuckles. “That was a terrible thing to spring on a 13-year-old with hormones. I thought, boy when I get big I got to get some of that.”

Now 80 years old and the Delaware Valley’s professor emeritus of jazz on the air, Perkins is glad he was around when jazz still ruled, not just in places like Club Harlem but on bandstands and hit parades around the nation and the world. Created in the south from a blend of ragtime, the blues, and the soul sister of the blues, the Negro spiritual, jazz has been called America’s only indigenous musical art form.

Incorporating elements of swing, Dixieland, boogie-woogie and the horn-infused sound of Dixieland marching bands, jazz spread like wildfire from its New Orleans birthplace to Chicago, Kansas City, New York and beyond. And man, was it big in AC.


When Music Brought People Together
At Club Harlem and other renowned nightclubs in the city?Grace’s Little Belmont, the Brown Jug, the Wonder Garden and many more blacks and whites alike lined up to hear now-legendary artists including Billie Holiday, Wild Bill Davis, Johnny Hodges, “Sassy” Sarah Vaughan and Cab Calloway. By night, a shared love of jazz unified the people. By day, of course, they retreated into the segregation that marked that era and, to some extent, has marked each generation before and since.

The great divide may have been most evident on the beach. By unofficial but strongly enforced decree, black residents and visitors were relegated to the “colored beach,” a strip of sand at Missouri Avenue. Because they were unwelcome in most local restaurants and other eateries, black beachgoers?those who lived in Atlantic City and day-trippers who came by bus or train?packed their own lunches in shoe boxes, hampers and baskets. Fried chicken stood up in hot weather, so it was always on the menu, and sometimes the picnickers left telltale remnants of the feasts behind. In short order, the strand at Missouri Avenue became known as Chicken Bone Beach.

“It was a derogatory term by the locals,” says Henrietta Shelton, who grew up in Atlantic City. “Going back to the 1930s, when Atlantic City started becoming a tourist destination, middle-class whites complained about how freely blacks walked around the beach.” While theoretically blacks could patronize any beach of their choice, “They would be shunned and get so uncomfortable” if they stepped on a whites-only beach, Shelton says. “Atlantic City was just like the rest of America. You didn’t have signs. But there were unspoken signs.”

‘Profile’ Beach
In 2000, when Shelton founded the Chicken Bone Beach Historical Foundation, she did it in part to redefine what had been a slur on African-Americans?to celebrate the history of that beach, even though it was born in an age of racial injustice. Many people, including Shelton, have wonderful memories of Chicken Bone Beach.

“It was a ‘profile beach,’” a place people went to show off their best summer bibs and tuckers, says Shelton with a laugh. “If the women could have worn mink stoles there, they would have.”

It was also a hangout for world-class entertainers. The same stars who played to white audiences each night relaxed at Chicken Bone Beach each day. Anyone strolling along the sands back then might have seen the likes of Sammy Davis Jr. (usually surrounded by a bevy of pretty girls), Lady Day, or gospel great Mahalia Jackson. One famous photo shows Martin Luther King Jr. on the beach at Missouri Avenue.

“It’s famous but kind of infamous too,” says Perkins. “Because of Chicken Bone Beach being segregated until the latter 1960s, infamy goes along with the famous stuff in Atlantic City. But people carved out their own niche. They had their own fun on their own turf.”

Incidentally, Chicken Bone Beach only employed only black lifeguards; highlighting the lunacy of segregation, those lifeguards were actually prohibited from rescuing whites!

Shelton was inspired to establish the Chicken Bone Beach Foundation during a trip to Maine, where she learned about another segregated beach, Inkwell Beach on Martha’s Vineyard. “My goal was to let people know how dynamic Atlantic City used to be,” she says, chiefly through the foundation’s acclaimed summer concert series, held every July and August. “Atlantic City was just as famous as New York, but no one is telling the story.”


Living Legacy
These days, it’s not as easy to find live jazz in the city?a Sunday night jazz series at the Chelsea Hotel has come and gone, along with jazz concerts at the now-defunct Atlantic Club. But it’s worth searching for live jazz, and you can find it. Kelsey’s Supper Club, in the heart of downtown on Pacific Avenue, is a great place to hear performers like Cedric Napoleon and Friends and the Eddie Morgan Trio. And free Jazz Vespers concerts are held every third Sunday of the month at 4 p.m. at Asbury United Methodist Church, 1213 Pacific Avenue.

Summers, of course, it’s all about the Chicken Bone Beach concerts, which in the past have featured superstars of jazz including Etta Jones and Houston Person, Gloria Lynne, Joe Chambers with Slide Hampton and Buster Williams, Charles Fambrough, Bootsie Barnes and Donald Byrd.

While these names may not be well-known to youngsters weaned on rap, hip-hop and pop, during Black History Month, it’s especially worthwhile to think about the contributions of jazz musicians to the national culture. As the late jazz drummer Chico Hamilton once lamented, “Most black youth of today do not know it or even care to know it.”

Bob Perkins isn’t surprised. “The enthusiasm of other people for American jazz is just phenomenal, but here, it’s like a prophet without honor. It’s as if Einstein’s kids didn’t know who their father was until someone points it out to them. Then they go, ‘Damn!’ They kinda wake up after that.”

Drummer Keith Hollis, who started playing at nine years of age in his Atlantic City church, urges kids to educate themselves about their musical legacy. “Club Harlem used to be packed and mobbed with people, and I think that’s the missing element here. Music says a lot about the people and the city. And we don’t have enough of that music scene.”

With the advocacy of people like Henrietta Shelton, jazz will always be a part of Atlantic City. “Jazz isn’t given the merit it used to have,” she says. “That’s why I love this project. This is my baby.”

To learn more about the Chicken Bone Beach Foundation and its acclaimed summer jazz concert series, held at Kennedy Plaza and venues throughout the city, visit www.chickenbonebeach.org.